There is a wide range of medicinal mushrooms. These discussed below have been purchased only from a local supermarket, but there is far more mushrooms with medicinal properties. You must be absolutely sure when you pick up your mushrooms in the forest. The safest way is to buy farmed mushrooms. Have mushrooms meal once a week at least.

Enokitake is a popular edible mushroom in Japan where a tender cultivated form of the wild version. It is commonly used in Japanese cooking and increasingly can be found in salads in gourmet restaurants. If taken on a regular basis, Flammulina velutipes ( Enokitake) may prevent, as well as cure, liver disease and gastroenteric ulcers (Ying et al, 1987; .Yoshioka et al, 1973).

Enokitake contains several types of amino acids including valine, which inhibits the growth of Ehrlich ascities tumour and sarcoma 180 in mice; and lysine, reported to increase body height and weight (Ying et al, 1987). Enokitake contains a cardiotoxic protein (flammutoxin) that is rendered harmless when subjected to heat (100 degrees C) for 20 minutes. I would caution against the chronic use of enokitake raw in salads or other dishes.

Oyster mushrooms can help your body as well! So far they seem to have the most promising effect on cholesterol levels and cancer.Oysters naturally produce compounds called statins. Statin drugs reduce “bad cholesterol” (LDL) by stimulating receptors in the liver to clear the cholesterol from the body.

Studies have shown a link between consuming Pleurotus ostreatus and a lowering of cholesterol levels, no doubt due to the statins they produce. Hopefully future research will reveal exactly how much to eat to get these effects.

As for cancer, research shows a possible anti-tumor effect from polysaccharides in oysters. A polysaccharide is a complex carbohydrate made up of smaller sugar molecules.

Specific polysaccharides, known as beta-D-glucans, are suspected to stimulate the immune system to fight cancer.The beta-D-glucan isolated from oyster mushrooms is called pleuran. Studies are ongoing into the effects of pleuran for cancer treatment. Eventually I’d like to link to a legitimate human trial, as all those I’ve found so far have used laboratory animals.

Shiitake mushrooms are prized around the world for its medicinal properties.  It is one of the most popular sources of protein in China, Japan, and the rest of Asia.  It’s popularity is not due to it’s ample protein but it’s delicious flavor and other medicinal attributes.

Shiitake mushrooms have a strong antiviral effect which is believed to be caused by the amount of interferons inherent in the mushroom.  Inteferons are natural proteins that are typically created in vertebrates which create them as a reaction to viruses, bacteria, cancerous cells, and parasites.  They help to inhibit the replication of these pathogens and therefore the existence of them in shiitake mushrooms boosts the immune system of the consumer.

It has also been discovered that the consumption of shiitake mushrooms lowers blood cholesterol levels by up to 40-45%.  The results were most apparent in the studies when Shiitakes were simultaneously consumed with high cholesterol foods.  Because it contains no cholesterol itself but is an excellent substitute for cholesterol heavy meats, it is the perfect choice for someone who needs to cut back on their red meat intake.

Japan has developed an extract from Shiitakes known as Lentinan.  The extract is used with patients undergoing traditional cancer therapy. In fact, in Japan mushroom extracts have become the leading prescription treatment for cancer.  Lentinan may also prevent chromosomal damage induced by ant-cancer drugs.  There are no known serious side effects yet in the west we have yet to make immunopotentiators such Lentinan available to cancer patients undergoing chemotherapy.  In experiments in Japan, mice treated with Lentinan prior to chemotherapy completely protected them from a reduction in white blood cell counts.

As a food source, Shiitake contains all eight of the essential amino acids in a better ratio than meat, milk, eggs, or soy beans.  Not to mention they contain an excellent combination of vitamins and mineral including A, B, B12, C, and D.  In addition, Shiitake produces a fat-absorbing compound which is perfect for those wanting to lose weight.  It’s no wonder why the shiitake is also known as the “miracle mushroom”. 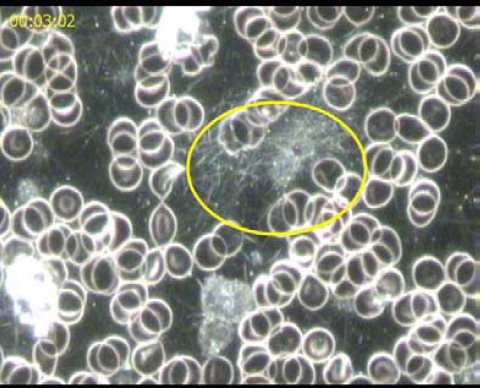 LIVE BLOOD BEFORE AND AFTER DRINKING COFFEE